Bitsbox is a free website where kids ages 6-12 code apps for real devices (and learn how to program as they do!) Subscribers get boxes packed with new projects every month.

Kids play with Bitsbox by coding apps that work on real phones and tablets. You can think of Bitsbox as a two-part learning system:

The free Bitsbox website provides each kid with a virtual tablet that runs the apps they build. The tablet is on the left and their code is on the right. To run an app on a real device, they scan the QR code on the computer screen. Zap! That’s all there is to it.

Bitsbox subscribers get a monthly box shipped to their home (or an emailed PDF file if they prefer). It’s filled with dozens of new app projects that re-ignite kids’ interest in coding every few weeks. Kids love getting physical stuff in the mail—Bitsbox uses that excitement to help them keep learning.

That's Bitsbox: the coolness of coding real apps, fueled by getting presents in the mail.

We created Bitsbox for three reasons:

It’s never too early to start learning languages. If you want your kids to learn to code, the best time to start is when they’re little. Bitsbox is designed for kids as young as seven years old, though we’ve seen five-year-olds get the hang of it with help from their parents.

Writing real code is awesome. We love block-based tools like Scratch—they’re great for learning programming concepts and computational thinking. But eventually, there’s typing to be done, and it turns out that kids think it’s fun and grown-up to use the keyboard.

The enemy isn’t hard; the enemy is boring. Learning to code takes time and practice. Sometimes it’s just plain hard. But that’s okay—we know kids are willing to work at learning hard things as long as they don’t get bored along the way. Bitsbox is all about providing piles of exciting new projects and delivering them in an exciting format: monthly surprise boxes that come in the mail.

Bitsbox takes a “free play” approach to teaching kids to code. Kids pick and choose which apps they want to build. Different apps teach different concepts and language, but none of that is apparent to the kids—they end up learning to code as a consequence of having fun.

Here’s how it works:

A box gets delivered to your kid at home. She (or he) goes through the materials and picks an app to build. The code for the app is right there on the printed page.

2. Type the app into Bitsbox.com.

Your kid goes to his (or her) account at Bitsbox.com, creates a new app, and types in the code. We’ve watched dozens of kids do this, and amazingly, they don’t think it’s boring at all. They think it’s exciting and challenging to “get everything right”; the payoff is being able to use the app.

3. Change the app to make it your own.

Here’s the really fun part: It’s incredibly easy for kids to change the details of any app to make it their own. By swapping in new graphics and sounds, and changing variables like color, speed and size, they create brand new apps. And guess what? They learn what the code actually does.

4. Scan the QR code with a mobile device.

To use the app on a real tablet or phone, your kid scans the QR code on the computer screen with the device’s camera.

5. Use the app on the mobile device.

The app appears (in all its glory) right on the device. And when the code changes on the computer, the app updates on the device, too. Kids can even build apps that send information back and forth between multiple devices.

We're Scott Lininger and Aidan Chopra, a couple of dads in Boulder, Colorado. We met at Google, where we both worked on a product called SketchUp for many years. Aidan was a global product evangelist and Scott was a senior software engineer. Last April, we left our cushy corporate jobs to chase this dream. We're building Bitsbox for our kids—and hopefully yours, too!

CBS News Interview, February 4, 2015: Can coding become a second language for the next generation?

Every month will have a different theme. They’ll probably be kid-friendly, gender-neutral things like Outer Space and Outrageous Animals.

We think each Bitsbox will contain: *

* It’s funny how ideas tend to improve over time, and there’s quite a bit of time between now and the end of April. We fully expect the details of what goes into the boxes to evolve as we work on the idea, and you should, too. Part of the fun of getting a box in the mail is the surprise of exactly what's inside!

Have we ever. Bitsbox is currently a featured activity on code.org's Learn an Hour of Code page. In the few months since we launched,

Since April, we've done hands-on testing with hundreds of kids, in groups of 10 to 40. They've been girls and boys, ages 6 to 11, mostly in classroom computer lab settings. Our young testers are diverse, too—some have had computers and iPads since they were zygotes, and some only have access to technology at school.

We're happy to say that testing has gone very, very well. Kids of all ages are able to create their first "Hello World" app in less than 10 minutes, and most can complete three or four apps in less than an hour. More importantly, they LOVE it: In a test we ran with third-graders in October, their teacher tried to appease their end-of-session disappointment by saying, "If you do your homework, and you're good, we can do Bitsbox again soon."

Bitsbox has been an amazing tool to use to introduce kids to the basics of computer programming and coding. Overhearing them sharing with each other that computer programing is "Awesome!" and seeing how excited they are to actually build their own app has been quite rewarding.– from Natalie Wohlers, Gradeschool Tech Teacher, Wamego School District (USD 320)

The kids were so involved. It was awesome. Some of my more, lets say “easily distracted” kids, were very involved and engaged the whole time, which is awesome to see and so rarely happens. – from Seth Hays, I Have a Dream Foundation

...about coding for kids:

In fifteen years we’ll be teaching programming just like reading and writing... and wondering why we didn’t do it sooner.- from Mark Zuckerberg, Founder of Facebook

To prepare humanity for the next 100 years, we need more of our children to learn computer programming skills, regardless of their future profession. Along with reading and writing, the ability to program is going to define what an educated person is.- from Salman Khan, Founder of Khan Academy

Whether you want to uncover the secrets of the universe, or you just want to pursue a career in the 21st century, basic computer programming is an essential skill to learn. – from Stephen Hawking, Physicist

Your cart is empty 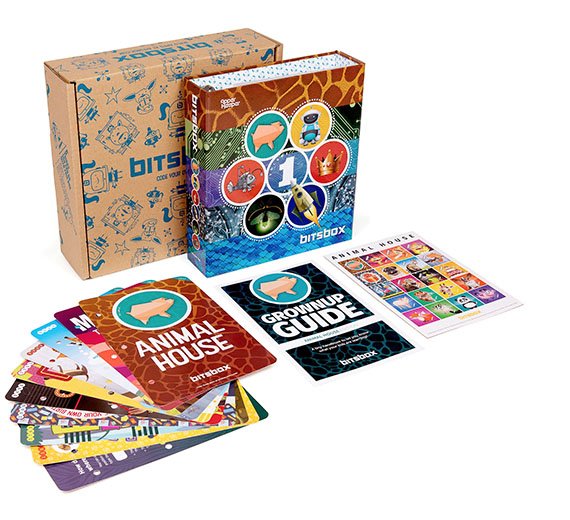 See what comes in the Basic box ↓

What comes in the Basic box? 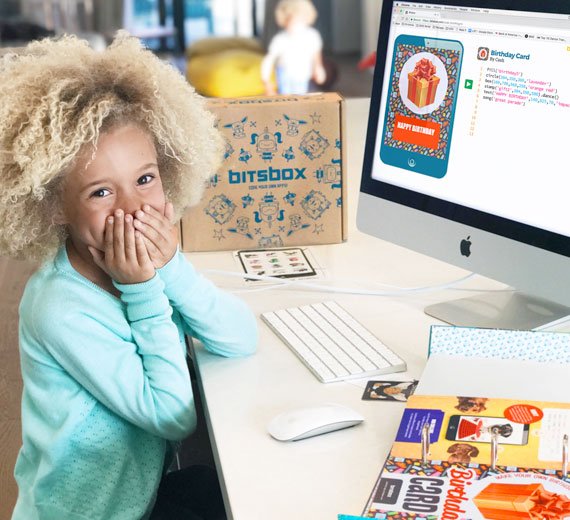 See what comes in the Deluxe box ↓

What comes in the Deluxe box? 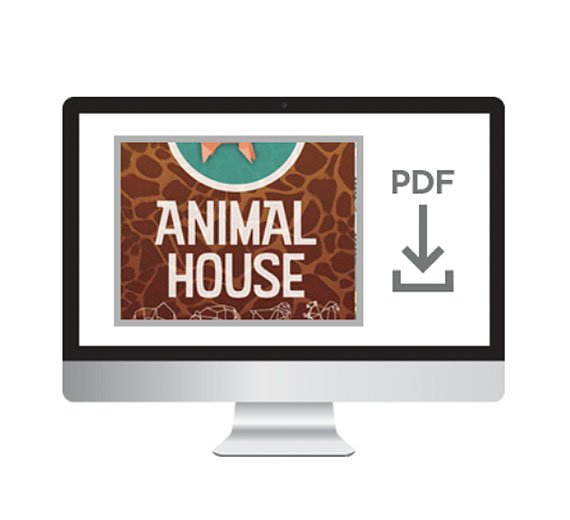 See what comes in the Digital box ↓

$19.95 billed every month
Sent via email

What comes in the Digital box?